Trips to The Azores

Find all The Azores holidays View all Europes

Tucked away to the left of the Iberian Peninsula, the Azores are a collection of nine pretty volcanic islands belonging to Portugal. Small though they may be, each one is bright green and bursting with fauna, overflowing with a unique culture which has developed separately from the mainland.

Our family holiday here takes you to the island of São Miguel, largest of the nine and part of the archipelago’s Eastern Group. Family activity playgrounds are everywhere! Take the crater lake Sete Cidades and Fogo as examples – marvellous locations for kayaking, cycling and hiking. Above ground, there is outstanding natural park territory, as in the region of Nordeste; below, astonishing caves and tunnels of lava formed over countless years.

Lava and volcanoes are, of course, central to life on the Azores – the smoking, breathing earth can be safely seen at places like Furnas. Underground activity is also responsible for the bubbling hot springs which you’ll find around São Miguel; take time for a refreshing dip in their mineral-rich waters! Speaking of water, we would never forget to mention the Atlantic waters which ring the Azores, internationally famed as some of the best for watching whales and dolphins in the wild.

Tropical but not too far from home, volcanic by nature and yet blissfully calm, small but undeniably mighty: the exceptional Azores.

Let us help you

Our trips to The Azores

View all holidays to The Azores 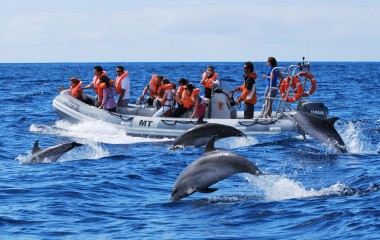 The Azores – Lava Lands and Swimming with Dolphins 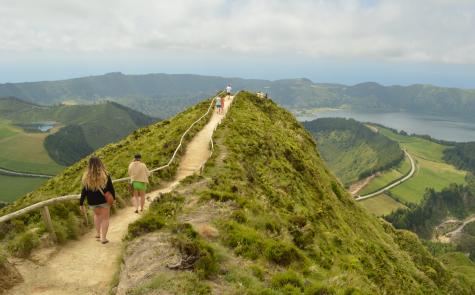 Our Azores holiday offers a fine combination of nature and culture around São Miguel. It is easy to get about on this island due to its small size, giving you and the kids excellent exposure to its different environments, all while taking part in a stunning activity mix.

The volcanic landscape of the Azores is something you will get familiar with throughout your trip, such as when biking by and kayaking over Sete Cidades Lake, or walking on the black sands of Santa Bárbara Beach. Visit the area of Furnas and taste a famous ‘cozido’ stew prepared using natural steam; relax in the therapeutic waters of Caldeira Velha waterfall and Terra Nostra Botanical Garden.

Our family holiday features two incredible opportunities to see marine wildlife firsthand. There is a morning of whale and dolphin watching, with the chance to spot various members of over 25 different species in the ocean. On a separate day, you will also be able to go swimming with dolphins in their natural habitat!

Back on land, we’ve organised canyoning in the magnificent Ribeira dos Caldeirões Natural Park, as well as a trip to the Priolo Environmental Centre to find out about local conservation efforts. You will also wander through Gruta do Carvão, the longest lava tunnel on the island.

Away from the Algarve

When it comes to choosing Portuguese holiday destinations, many people tend to pick the popular tourist region of the Algarve. Doing so, they can miss out on the rich range of activity environments that can be found in this part of the world, and the Azores is a perfect example. You only need to look a little bit more to the left on the map!

Just think what a time you will have playing on Santa Bárbara Beach or jumping around the canyons of Ribeira dos Caldeirões. There aren’t many times you’ll get to visit a subterranean lava passage, so make the most of Gruta do Carvão.

We have no doubt that you love animals just as much as we do and have included plenty of opportunities to learn about them on our Azores holiday. Observing whales as nature intended is utterly awe-inspiring, and many levels more exciting than watching them on television. Likewise, swimming with dolphins will fill you with admiration at their intelligence and grace. We’re sure that you and the children will be similarly taken by the work of the Priolo Environmental Centre in Serra da Tronqueira. 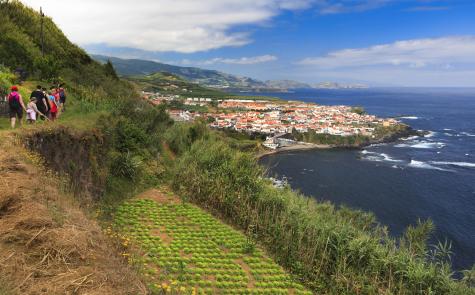