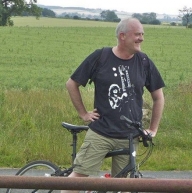 Email me Call me Read my blog

Ali founded Activities Abroad a long, long time ago after returning to the UK after a year-long bike ride across Europe. Aged 30-something, he was sitting in his parents’ house with no job, no money and absolutely no prospects and thinking, “What am I going to do for the rest of my life?”

So, he sat down with a piece of paper and a pencil and made a list of all the things he enjoyed doing most. Top of that list were two things:

Armed with this vague vision of his future it occurred to him that the best way to achieve a combination of these two things was to create a travel company specialising in activity holidays. That’s all well and good but he had absolutely no idea where to start so, aged 32, he went back to university and emerged four years later with a degree in Travel and Tourism Management (a 1st Class Honours degree as he is constantly reminding us!).

Next up, he needed some experience, so he worked for two tour operating companies before one day walking into his boss’s office and telling him where to stick his job (honestly, this really happened). Not surprisingly, Ali awoke the next day to find himself unemployed and lying next to an extremely unhappy wife!

It wasn’t the greatest of times but realising that he was essentially unemployable was the spur to taking control of his own life and setting up Activities Abroad. Ali now has two teenage children and the same long-suffering wife Kate. As Chairman, he now increasingly focusses on his family and cycling (best not start a chat on cycling with him as you may be there a while) and he is very proud of the team who now run his company for him. His family can now spend an increasingly large amount of time visiting and checking out the destinations featured by Activities Abroad.

After all, that’s why Ali set up the business isn’t it?

Ali’s favourite experiences have changed with the ages of his children. Seeing Father Christmas in Kuusamo provided lifelong memories with his little ones. Then as they have grown Saariselka Northern Lights Village, Menesjarvi and Nellim have become firm family favourites. To be honest, he basically cannot choose!

During the summer, Croatia has always been a real family favourite in the McLean household. It is where Ali and his wife honeymooned, and so it was natural that they would like to share the incredible scenery and coastline with their own children. The diversity of the country and the islands is something which keeps them coming back for more and has meant that it has been a great destination, no matter the age of the kids.