Family Adventures in the Azores by Eleanor Findlater 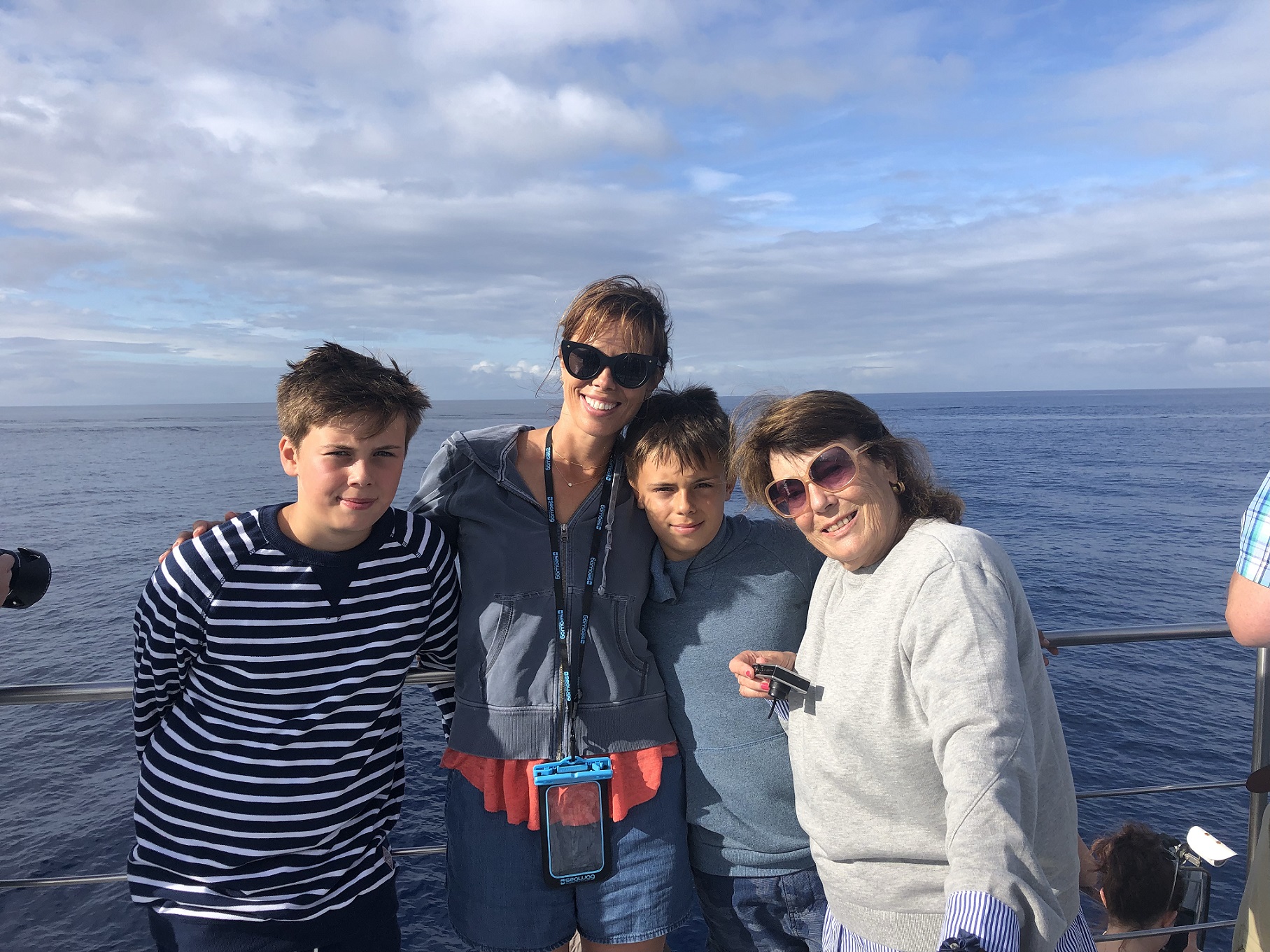 Former television presenter and journalist Eleanor Findlater was looking for a holiday to suit her family's love of nature and adventure. After contacting Activities Abroad we knew there was only one place we could send her and the family - The Azores! We caught up with Eleanor to find out what she and her family thought about these incredible islands and the adventures that they enjoyed:

'The start of the summer holidays is rather a daunting prospect if you have two active and energetic boys aged 10 and 12. As a family, we have traditionally plumped for a beach holiday with no real structure to the trip, just an optimistic hope that the boys will perhaps meet similarly aged children to splash around in the sea with. The opportunity to go on an action-packed adventure in the Azores complete with a full daily itinerary seemed too good to be true. Sadly, my husband Andy could not join us due to work restrictions so Gogo (Granny) was more than happy to step in.

The exact location of this gorgeous cluster of volcanic islands (there are nine in total) was a slight mystery to the family. Like a handful of glistening emeralds thrown into the middle of the Atlantic, they are further away from Portugal mainland than we thought. After a four hour flight to Ponta Delgada, the capital of the main and most populated island, we settled into our four-star hotel full of anticipation and excitement for the week ahead.

Day one, after a huge buffet breakfast, we were met by Maria and Eulalia who were the Activities Abroad reps (or companions, corrected by my ten-year-old son). We were three families and would be travelling around in a minibus for the week. The friendly and lively pair gave us an informative introduction to the islands as we set off to visit a tea plantation and processing plant. Surprisingly perhaps, tea is one of the major exports of the Azores. Our adventurous week had begun. 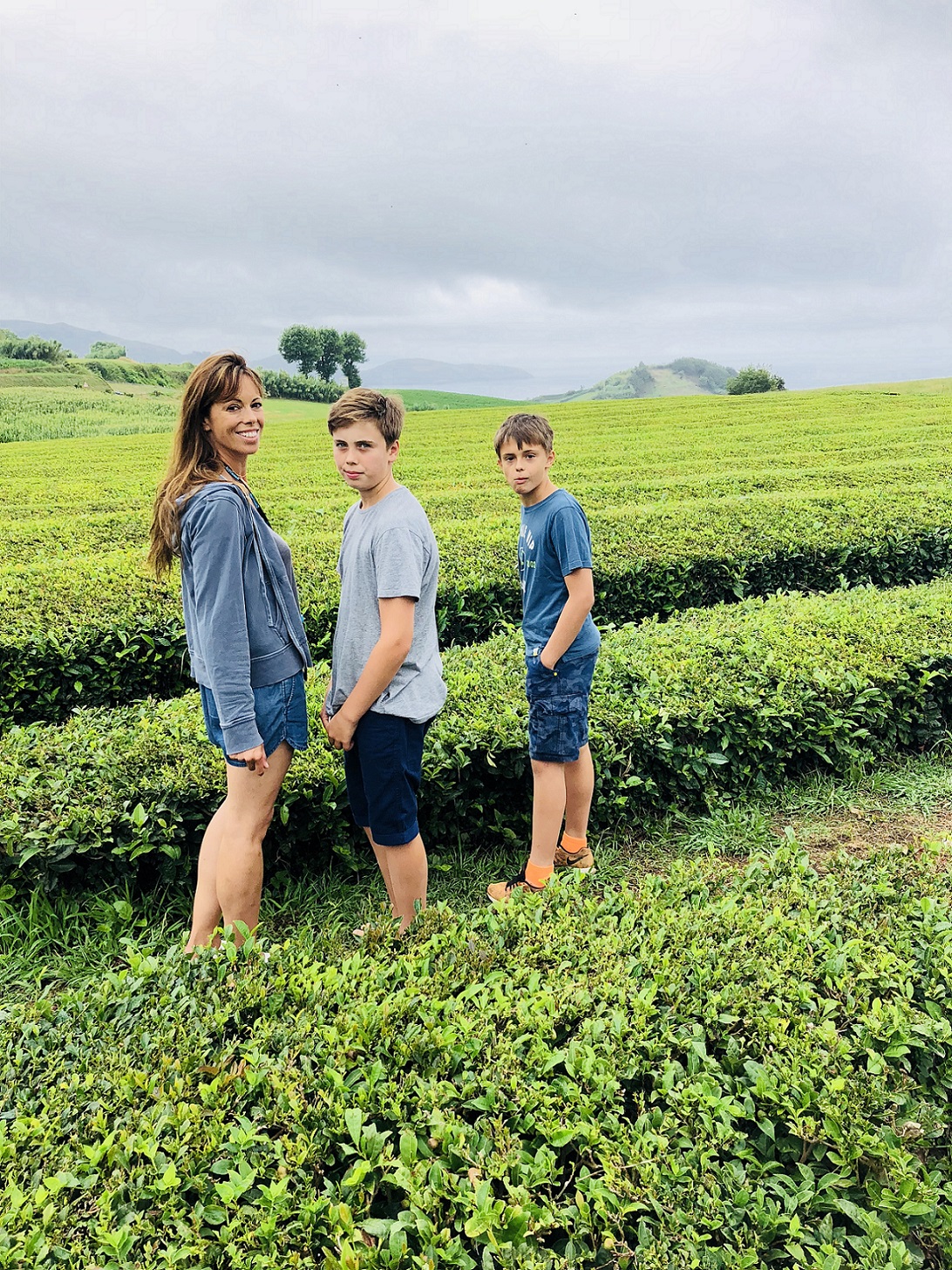 The tour was fascinating and the boys decided that the samples of black or green tea were rather delicious made more palatable by four sneakily added sugar sachets.

You can not fail to miss the main feature of our next stop. This volcanic archipelago is still very much alive with secondary volcanic features, mainly geothermal bubbling hot springs which are used for cooking huge pots of meat and vegetables together several feet below the ground. The sulphuric smell (and taste) was overwhelming but the novelty was not lost on the boys. The fact that the island is still alive with activity under our feet, provided an extra thrill for the children. 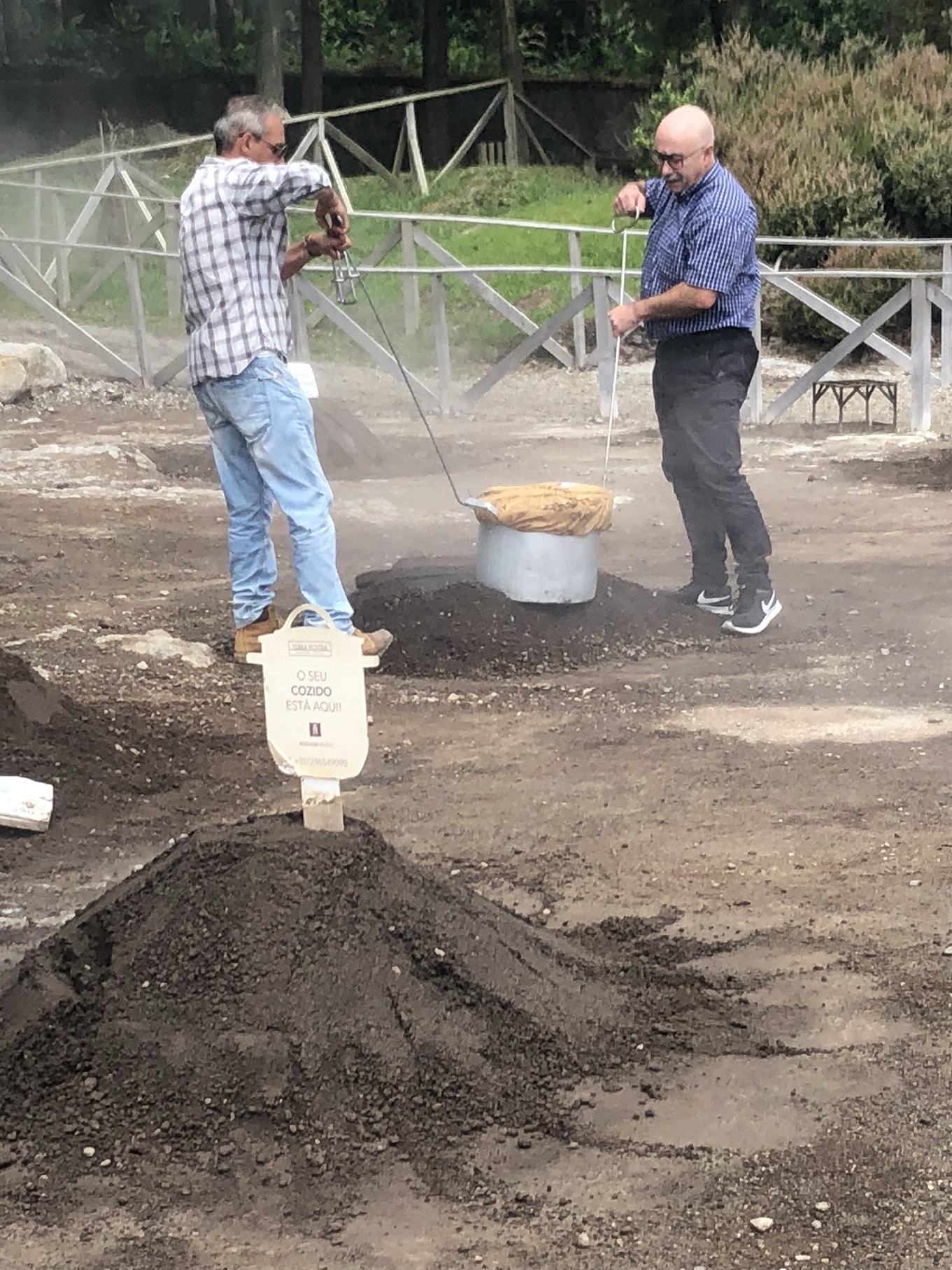 A huge draw of the Azores is a whale-watching tour and very much one of the highlights of the week. Whales are obviously wild animals and so when our whales decided to have a day off, we were rewarded with plenty of dolphin sightings, we lost count of the playful creatures we saw. We were fed marine facts over a tannoy during the two-hour boat trip. A most interesting fact is that dolphins sleep with one eye open and another being that first-time dolphin mums leave the parenting to the more experienced grandparents which amused Gogo! 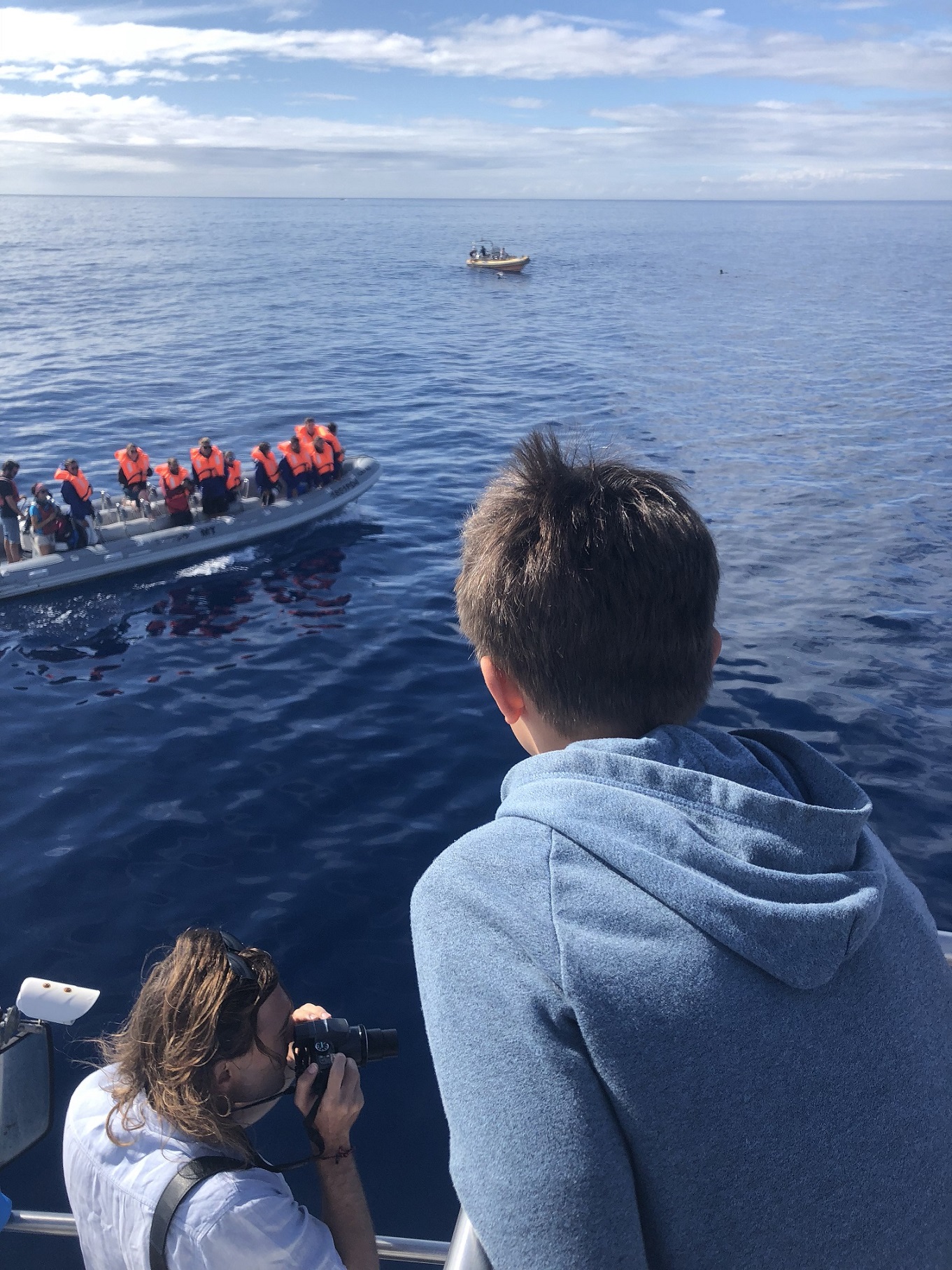 On day three there were more energetic activities. We did a cycle ride around the scenic Lagoa das Sete Citades or Lake of the Seven Cities, which is a deep crater lake formed mainly by rainwater. This was followed by a cooling dip and kayaking session. Gogo was able to join in kayaking, which the boys were thrilled about. 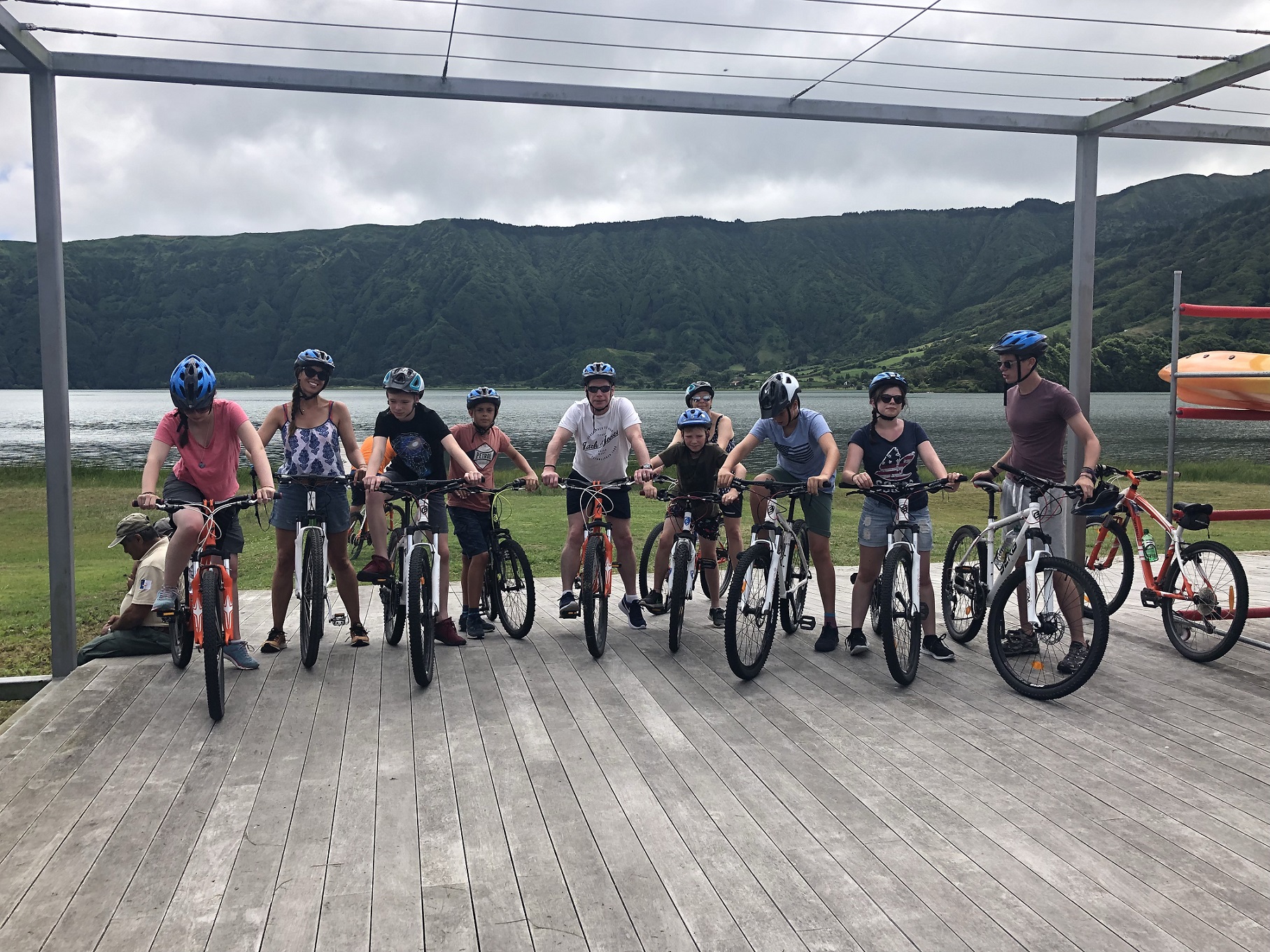 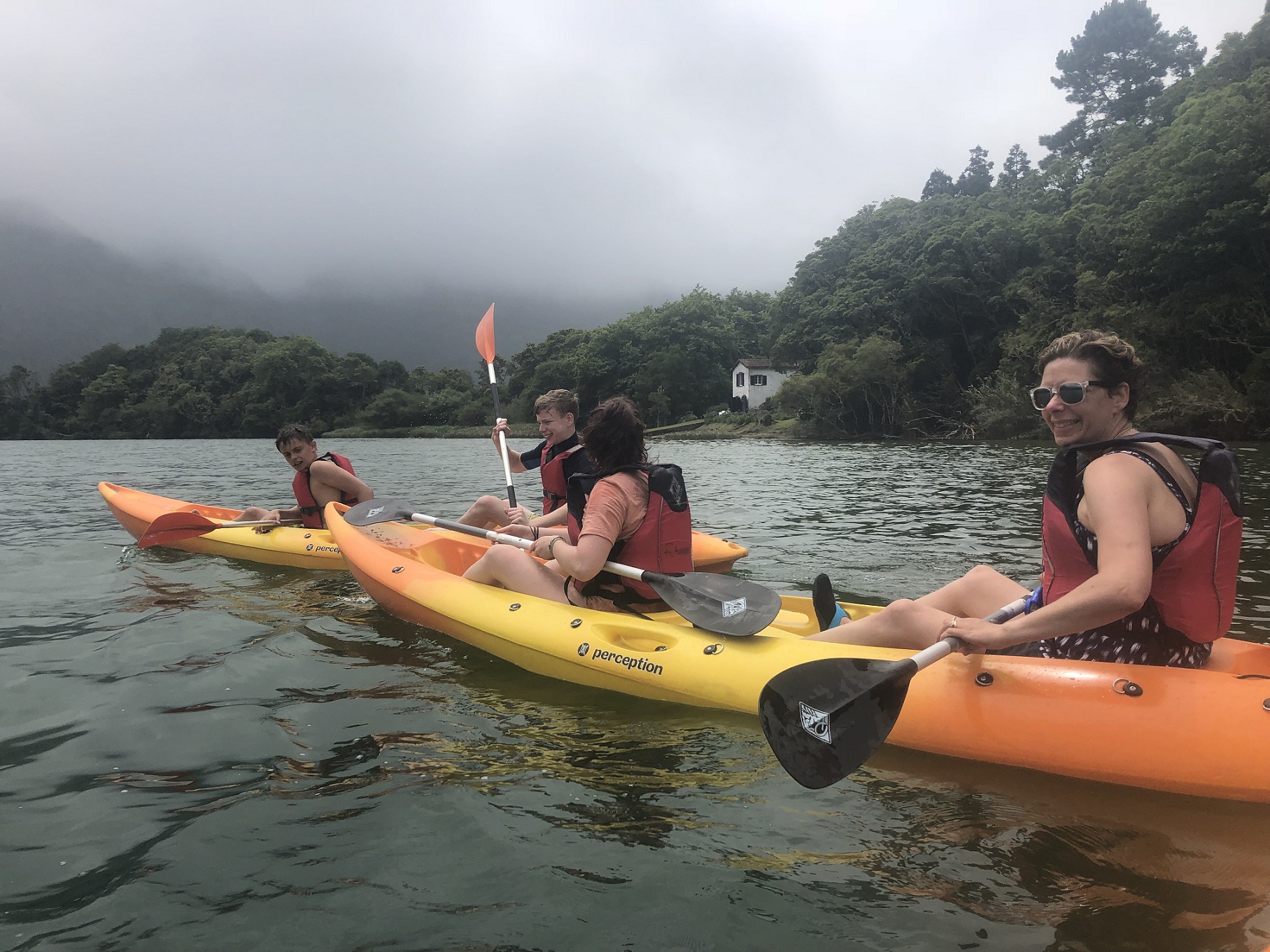 We had seen much dolphin activity earlier in the week, however, there was much excitement and anticipation on day four. We were given wetsuits and masks and snorkels and set off early morning in a zodiac boat. Within twenty minutes, we spotted a flock of seagulls frantically dipping and diving over a small area of ocean. Our multi-talented companion Maria manoeuvred the Zodiac within the direct path of the oncoming pod of dolphins. She expertly directed us two by two to slip into the sea with a minimum splash and immediately we were rewarded with the mesmerizing sight of dolphins swimming and feeding around us in the clear deep blue sea.  It was spectacular and beyond all our wildest expectations. 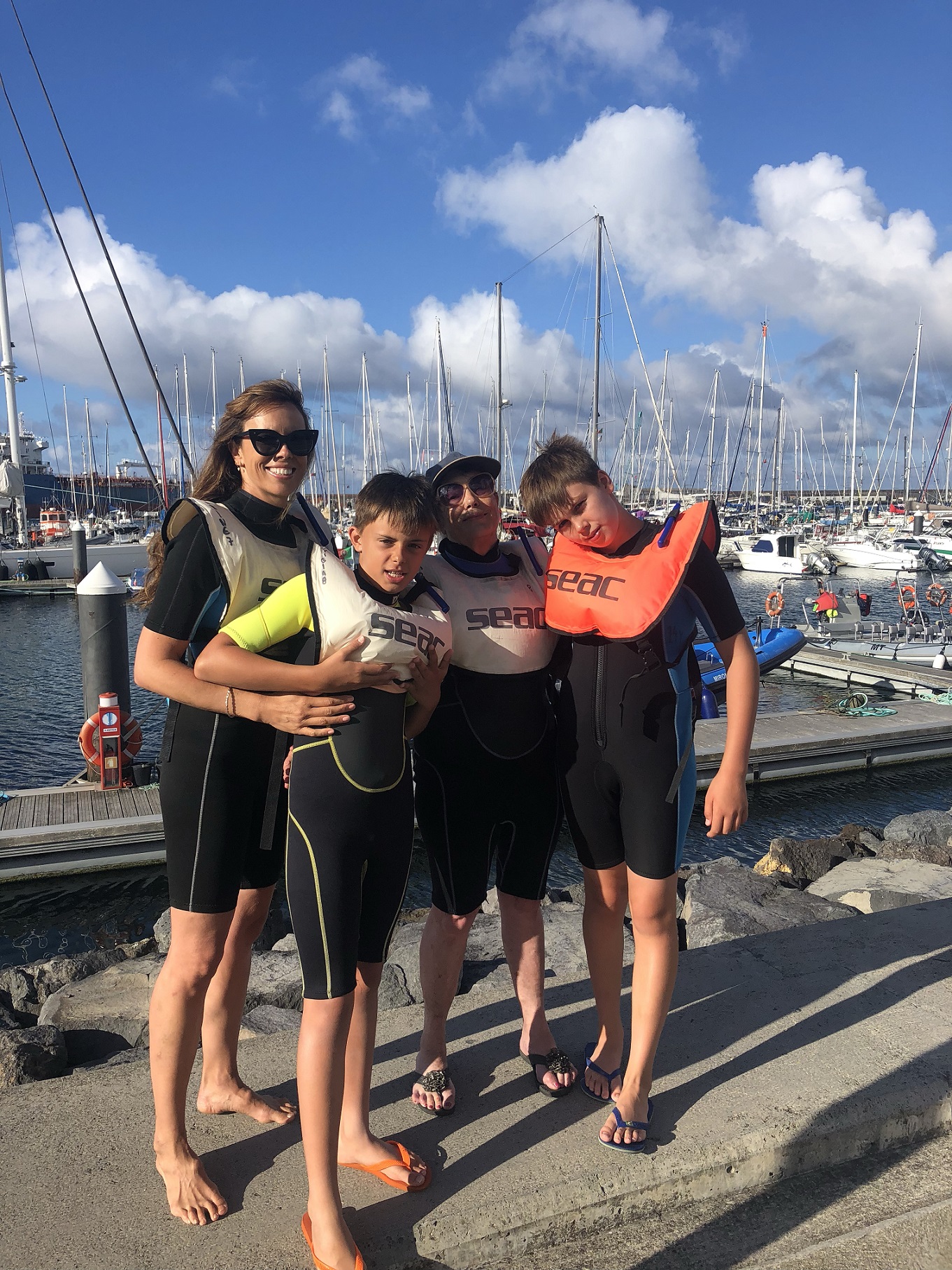 Day five proved to be a huge hit with the boys, a jeep tour to the farthest corners of the island with stops at hot springs and warm waterfalls. It was a fun mode of transport and perfect for off-road terrain. 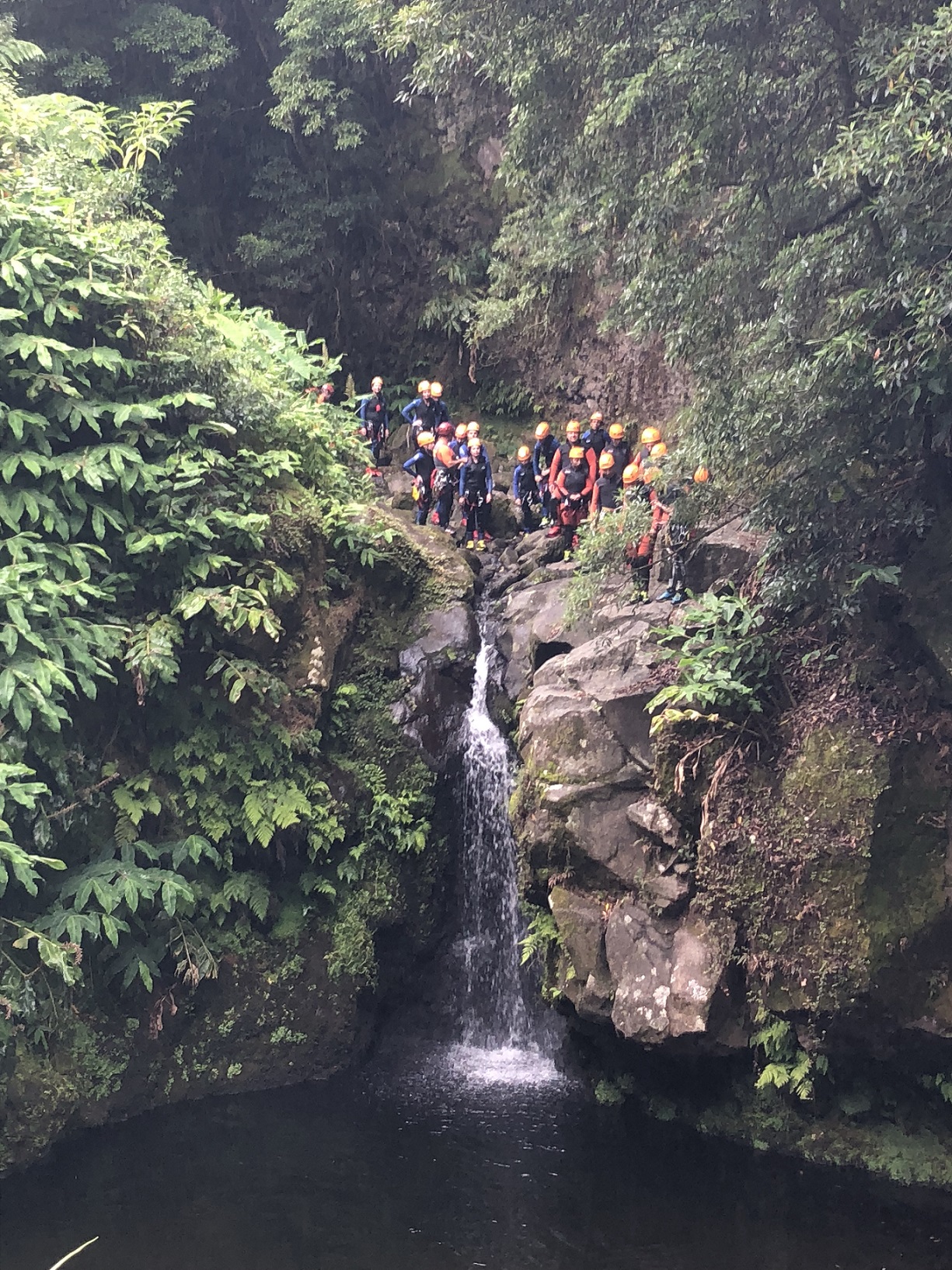 The last day involved the grand finale, canyoning. We drove to the meeting point in the Ribeira dos Caldeiroes Natural Park and were handed wetsuits, all-terrain waterproof boots and helmets needed for abseiling down waterfalls. We were not sure what to expect, however, the very experienced staff guided the group uphill through dense vegetation to where the canyoning began and explained what we were about to do.  It turned out to be a mix of abseiling and jumping down waterfalls, sliding down the rocks of this fast running stream and culminating in a very high eight-metre jump on the last waterfall. Gogo and I opted out of this one but Supergran had managed the rest.

By the end of the week, we all felt as though we had had amazing experiences in the beautiful Azores and a first time activity holiday, one difficult to beat.

Find out more about our family holidays to the Azores here.

« Top 5 things to do in the Galápagos Islands Get inspired to get away this winter! »
SHARE THIS: