The Pictorial Proof of the Pudding

We’ve been running activity holidays since 2002 and there have been many, many occasions when parents have commented on how our trips had helped to build their children’s confidence and self-belief. This is something I have seen in my own kids over the years but I’ve never had a pictorial example of just how inspiring our outdoor activities can be. That was until a few weeks ago when the McLean family joined Activities Abroad’s family holiday in The Azores and I went mountain biking with my son. 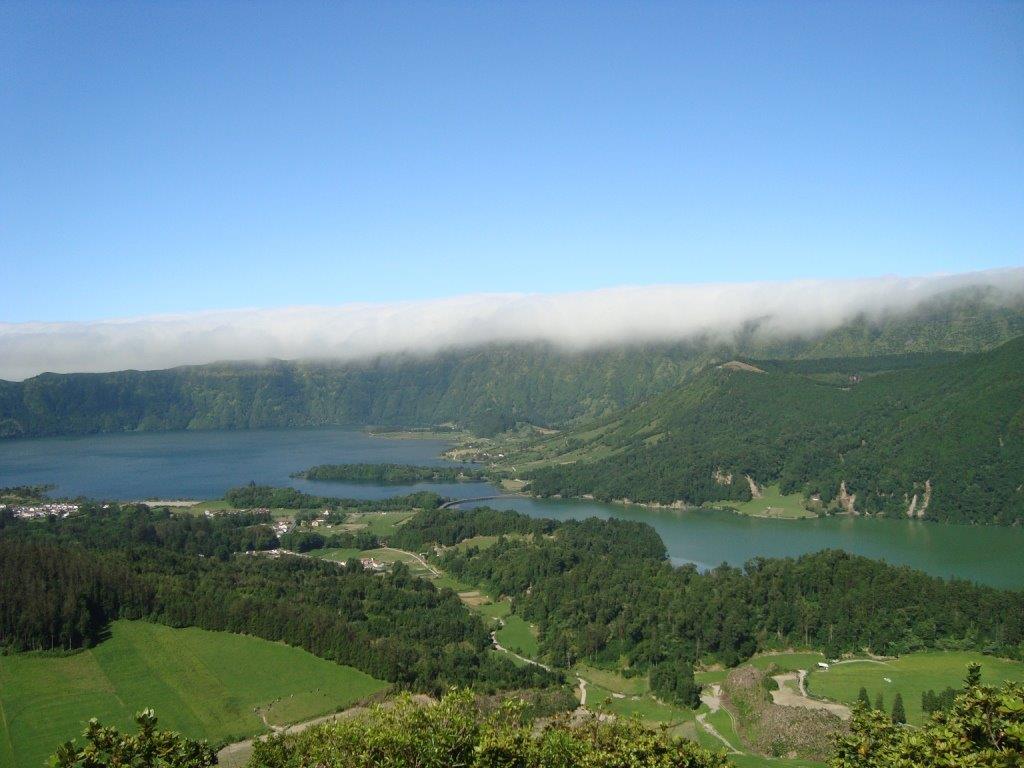 On the day in question we visited the spectacular volcanic lake at Sete Cidades (Seven Cities). The lake, which is dissected into two by a stone bridge, lies in the crater of a volcano and from its shoreline we were offered various cycling routes of varying difficulty. I’m a keen cyclist and my son wants to be a cycling journalist when he grows up so without hesitation, we plumped for the harder route which rises steeply on a mixture of tarmac roads and dirt trails to the rim of the crater.

Full of optimism and purpose we headed out of the village and, knowing that we had a bit of an ascent on our hands, were initially very pleased at the gentle gradient. Of course it didn’t last long and soon enough we were climbing a long and unforgiving 10% hill in pretty hot and humid conditions. I should mention now that my son is a powerful cyclist on the flat but can suffer sometimes on climbs and it was evident that today would be no exception.

Nevertheless, he ground it out until we reached an excellent viewpoint which we hoped was the summit. After a short rest and about a gallon of water we resumed our ride by turning off the tarmac road onto the dirt trail that would take us along the crater’s rim. However, I had forgotten my first rule of cycling which is “the top of the climb is NEVER around the next corner” and our belief that the topography would now smooth out proved to be very much mistaken.

In fact, the ride became harder as the gradient steepened again and the poorer surface made riding uphill even harder than it had been before. This was when my son started to really suffer. My suspicion is that he had got to the top of the first climb by determinedly keeping up with a slightly older girl who he seemed to quite like in a very, very innocent and really rather sweet 10 year old boy kind of way.

Eventually, we hit a particularly steep section of road and despite his very best efforts, my son ground to a halt and slumped over the handlebars in what appeared to be a gesture of resignation and defeat. I couldn’t resist taking a photograph of my broken boy as he gathered himself mentally to continue. 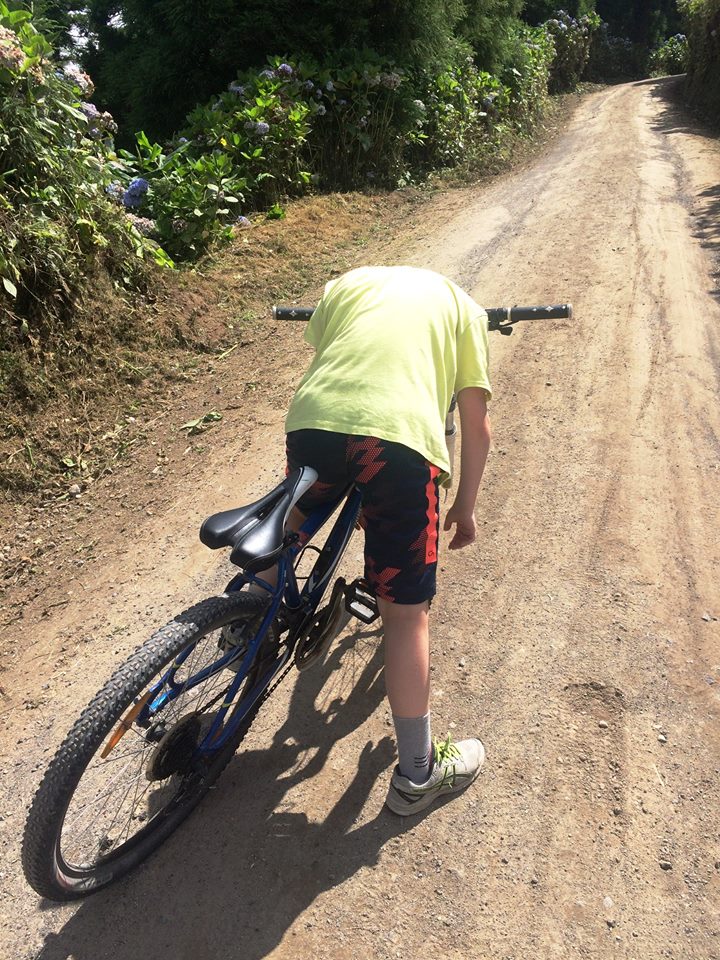 “Come on, you’re doing so well and it can’t be far to the road and it’ll be all downhill to the end from there” I cajoled and was rewarded as he started to push his bike to the top of that nasty stretch of road.

Just a few hundred metres further on we were rewarded with a fabulous 360° view at the ride’s highest point and we celebrated with a photograph which I think speaks volumes. 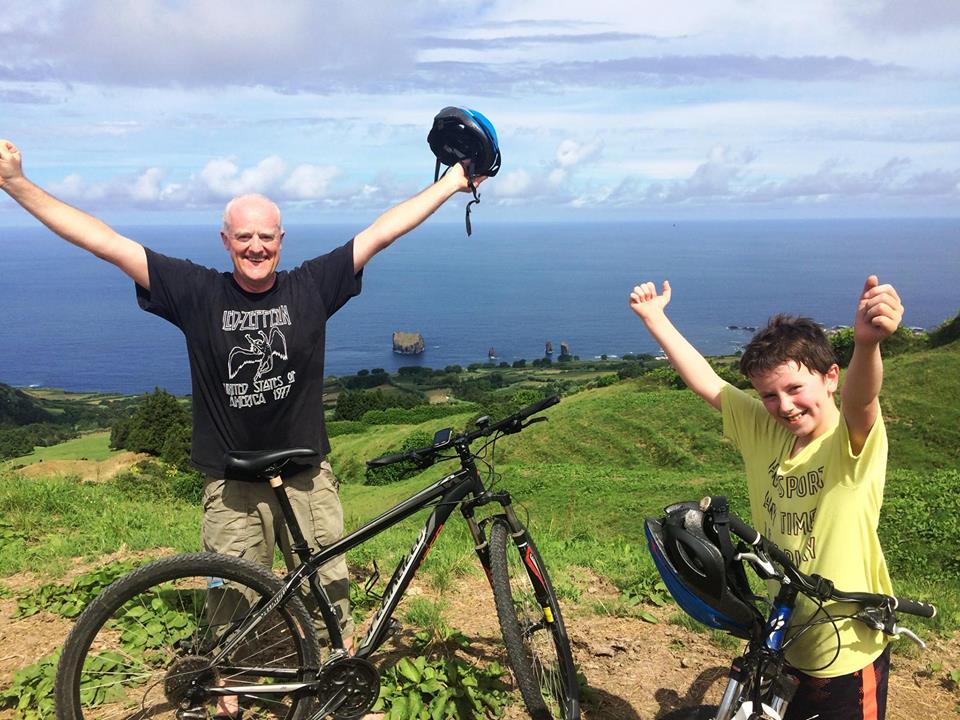 He was so pleased to have got to the top of that climb. Not because the hard work was over but because he knew that he had genuinely achieved something, because he had seriously doubted his ability to do it and had laid that particular demon to rest. I have rarely been prouder of him or more pleased for him than I was at that very moment. My arms are aloft and my smile is broad not because I’d reached the summit myself but because my boy had shown qualities that neither of us had known he had. It was a great moment for both of us and I am so pleased that we’ve got this picture to remember the moment.

The descent back to the lake was fabulous with barely a rotation of the legs required for a distance of five or six miles and when we arrived back I asked somewhat tentatively,

“Well, did you enjoy that?”

To which he replied,

“I hated the climb but the feeling at the top was brilliant. Yeah, I loved it.”

It was a great feeling. He didn’t say it out loud but it was so obvious that he was hugely proud of having achieved something that at one point he hadn’t thought possible.

I’ve known many parents tell similar stories about their own children doing our activities and as I read their comments I can almost visualise their chests swelling with pride. And, with every similar comment, my chest blows out just that little bit further too because it’s a wonderful feeling to know that children and parents alike can get such a buzz from our holidays. Long may it continue!